The Great 1000 mile feat at Ballarat

Another documented achievement by Allan McKean 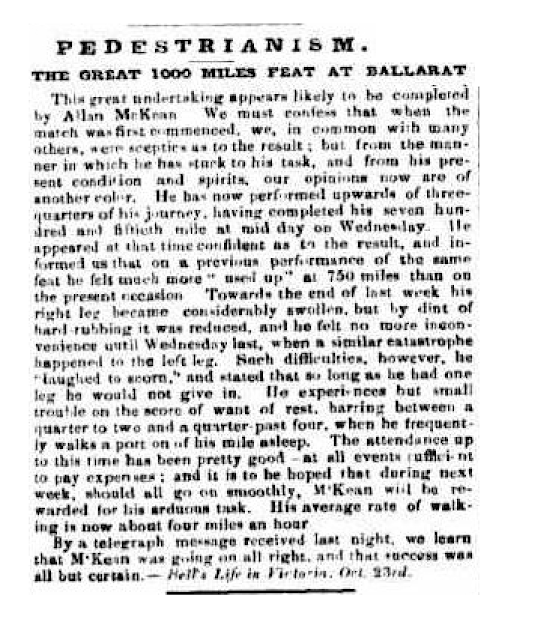 Report from the same race:

ALLAN M’KEAN’S WALKING FEAT - That this feat is finished, for the first time in Australia, by M’Kean, is a matter which has astonished almost everyone, and reflects infinite credit on the indomitable courage and powers of endurance which have sustained him throughout. We were present when he commenced his last mile at half past nine o’clock, and the theatre was crammed to the ceiling. The poor fellow seemed completely exhausted, his limbs almost refusing their office. Occasionally he had to be revived, and then again manfully started on his great emprize. The applause was loud and continual, and at last proved too much for M’Kean, who raised his arm in protest, and the walking proceeded in hushed silence. At last the long-wished-for twenty seven thousandth round alone remained to be done, and, exhausted as he was, M’Kean’s pluck rose to the emergency, and, though with sinking knees and bowed body, the feat was completed in a spurt, the mile having been completed in 22½ minutes. The applause was immense, and, supported on either side by his assistants, the now unrivalled colonial pedestrian came forward to say a word or two. Nature, however, claimed her long defrauded rights, and “Have I a friend to speak for me?” was all he could get out. Mr C. Dyte then came forward, and after a few appropriate words of eulogy, mentioned that, as a money speculation, the feat had been a loss instead of a gain to M’Kean. Mr Gibbs had, he said, promised a benefit next week at the Charlie, but something might be done at once; and Mr Dyte at once started a subscription in a hat, an example which was imitated by several other gentlemen, and a handsome sum was made up. M’Kean then retired, and his medical advisors, Drs Leman and Hobson, say it will be a long time before he recovers from the effects of his feat.